Magpas Air Ambulance, the lifesaving charity based in Cambridgeshire that cares for a population of over 10 million people, experienced 2 separate laser attacks in the month of November.

The aircraft, an AW169, with a full team of clinicians and aviation crew inside were targeted on the 19th November and 26th November, the consequence of which can be extremely dangerous.

Magpas Air Ambulance now want to raise awareness of the consequences of laser attacks to prevent such incidents happening again.

One of Magpas Air Ambulance’s Pilots, Captain Chris Sherriff, explains, “The effects of the laser depends on what type of laser it is and unless you’re an expert, you’ll rarely know the extent of the damage it can cause. From temporary short term loss of vision to serious permanent damage, a laser attack can not only be extremely dangerous in the moment – when multiple lives are in your hands as the pilot – but it can also have a severe long term, debilitating impact too.”

Not only can the emergency crews suffer from laser misuse, laser attacks are also a criminal offence and the Laser Misuse (Vehicles) Act 2018 now means that offenders can face an unlimited fine and even face a jail sentence of up to 5 years for endangering an aircraft.

Chris continues, “We obviously hope that no one is doing this maliciously or intending to cause any harm – and you can often see the beam in the sky or it lights up the cockpit first and alerts you to the danger. However, it’s important to remember that what may seem like innocent fun, could have extremely serious consequences for all involved.”

Fortunately, the two occurrences have both taken place when the Magpas Air Ambulance team have been flying back from emergency incidents. However, with the charity being called to the most seriously ill and injured patients in Cambridgeshire, Bedfordshire and across the East of England – and already dealing with the additional challenges that providing lifesaving care throughout the winter months bring – it’s important to note the detrimental effect such attacks could have on so many people. 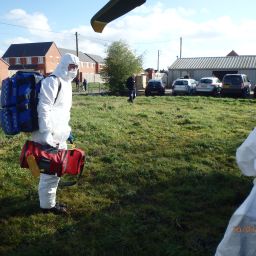