In 1971, two local Cambridgeshire GPs had the seed of an idea which would grow into one of the oldest emergency medical charities of its kind in the UK today.

Dr Neville Silverston MBE and Dr Derek Cracknell MBE were regularly called to certify deaths at road traffic collisions. They could see people needlessly dying due to a lack of medical care on scene, and vowed to do something about it.

Neville Silverston explains, “When I set up Magpas 50 years ago, it was at a time when the UK death rate – as a result of road accidents – was over 8,000 people a year, when the ambulance service was not run by the NHS and there was no such thing as an A&E consultant.”

Within a year, 120 GPs in Cambridgeshire had volunteered to attend every accident within the (what was then) Mid Anglia Constabulary police district, and MAGPAS – the Mid Anglia GP Accident Service was born. With the support of the local community, the charity raised the funds to equip every doctor with medical and radio equipment, and the organisation attended to its first patients in 1972.

As the service grew, the charity recognised the need to get their lifesaving skills to the scene of accidents even more quickly. They began flying with a police helicopter, before securing their own aircraft in 2012, which was then upgraded to the larger and even quicker AW169 in 2019. The charity, however, did not let go of its ability to respond by road, and currently operates three rapid response vehicles – one dedicated to operating in Luton and the surrounding areas of Bedfordshire.

Experts in their field, Magpas Air Ambulance clinicians have also pioneered the evolution of Pre-Hospital Emergency Medicine (PHEM) as a specialist area of medicine, and hosted the first ever PHEM trainee Doctor in the country in 2014. Still the largest PHEM training provider in the UK, Magpas Air Ambulance continues to train future generations of lifesaving clinicians ever year.  Today, voluntary GPs have been replaced by a specialist team consisting of a Doctor and Critical Care Paramedic, who together provide hospital level treatment using the most cutting edge equipment and medications not usually available outside of an Emergency Department.

Since 2016, the service has also operated 24/7, using an aircraft by day and an RRV through the night (when the time advantage of flying is reduced) and attends a wide variety of life endangering medical emergencies and road traffic collisions. Guy McAlister was one of the patients treated the same year, when he was caught in a gas canister explosion. Guy’s wife Katie explains, “The Magpas Air Ambulance team were first to get to us and there’s no doubt they made a massive difference for my husband. We still feel the same level of gratitude today as we did at the time. The air ambulance flies over us frequently and each time it does we wish the next patient the same good outcome Guy had.”

Now, 50 years on from Derek and Neville’s brainchild, Magpas Air Ambulance has treated over 70,000 patients; saving lives and keeping families together for generations.

A new bespoke airbase will be the next major milestone in the charity’s development, for which building will begin at Alconbury Weald in Cambridgeshire this year. The much-needed new base will improve activation times by road by as much as 15 minutes, and include a training centre, headquarters and crew facilities designed to effectively support the charity’s 24/7 operations for years to come.

Daryl Brown MBE, Magpas Air Ambulance’s Chief Executive, explains, “This investment in our service will ensure we can continue flying lifesaving care to patients in their ultimate moment of need. However, it’s important to remember that none of this would be possible without Magpas Air Ambulance’s incredible supporters. The only reason this charity has been able to evolve into the service it is today and save tens of thousands of lives, is down to community support and people donating, fundraising and leaving legacies.

“If you would like to help keep Magpas Air Ambulance flying for the next 50 years, then please make a donation today if you can.

“On behalf of our doctors and paramedics on the front line every day, and the patients that we have helped over the years, thank you.” 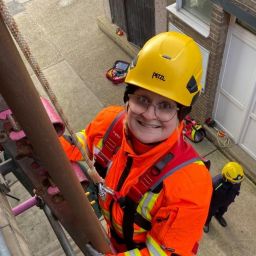 “Being a woman is an honour in this job” 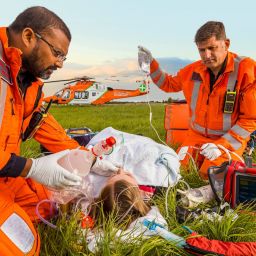 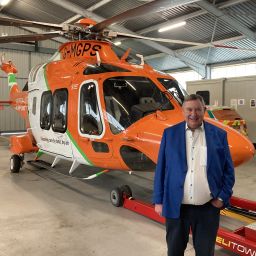