Saving lives is a team effort: Meet one of our Technical Crew Members

Simon Amos, from Peterborough, has worked with Cambridgeshire’s lifesaving service for a decade now, but his association with the charity stretches back even further.

Simon explains, “I worked with the Cambridgeshire Police for 30 years and in 1995 I became a Traffic Officer. I was called to a lot of severe accidents on the roads and saw people in some horrendous situations. It was in this time that I started working alongside Magpas. The Doctors would arrive in their own cars with flashing lights fitted, and later a green and white Volvo – the charity’s only official rapid response vehicle at the time – and look after people at the scene, before getting them to hospital.

“It wasn’t long before I became a part of the Cambridgeshire Constabulary’s Air Ops team, which Magpas Air Ambulance formed a partnership with, so we could fly their clinicians to accident scenes rather than them having to spend valuable time driving. The Police Air Ops unit was based out of a building at RAF Wyton, which Magpas then occupied one room of when the charity started responding via our helicopter. This building later became the current Magpas Air Ambulance operations base.”

Looking back, Simon recalls, “The old Police helicopter was small and would only hold one Pilot, two Police and a Magpas doctor, so if Magpas Air Ambulance needed to airlift a patient to hospital after treating them, we had to take a seat out to fit the stretcher in! I vividly remember being the person who had to stay with the seat once, after the Magpas Air Ambulance medical team had treated an equestrian. I was left in the middle of a field with the seat and had to wait for them to pick me up on their way back from hospital.”

In 2012, Cambridgeshire’s Police Air Operations Unit was closed and the Police who worked on the helicopter thought that was the end of their flying days. However, shortly after, Magpas Air Ambulance procured their own helicopter.

Simon says, “We received an email from Natalie Church, Magpas Air Ambulance’s Director of Operations, asking for our services again. Now, of the four Technical Crew Members at Magpas Air Ambulance, three of us are ex Police, having flown with them in the early days!”

Describing what Technical Crew Members do, Simon explains, “Magpas Air Ambulance have a dedicated Technical Crew Member on every shift. Instead of another Pilot on board or a medic having to navigate while airborne, Technical Crew Members help with fuel, navigation, monitor onboard computer systems and constantly look out for dangers and obstacles both in the air and on the ground such as other aircraft, parachutists, birds, power lines & wind farms.

“I also advise the pilot of any restricted airspace as well as the various air traffic frequencies required in order to notify an airport or airfield like Stansted or Luton of our presence. If we’re on route to an incident we get priority over other aircraft, which helps in cutting our response time even further.”

“Whilst we’re in the air I’ll also be looking at a satellite image of the area around where the incident is, identifying a suitable landing site & checking for any hazards that might be present.”

“From the moment we get a call, I listen in to the coordinates of the incident scene and input the grid reference into the iPad we use to navigate. Having served with the police for so long, if the incident is in Cambridgeshire, I could probably tell you exactly where that is and where we’re going to land from the coordinates alone.”

Once the Magpas Air Ambulance team are on scene and the Doctor and Critical Care Paramedic are with their patient(s), the Pilot and Technical Crew Member help with anything they can. “We don’t often get involved medically, although I have given CPR before when we’ve been first on scene.” Simon says. “I’ll also help carry equipment to the patient, get more equipment if needed, hold drips up – I’ll do anything I can. And when the patient has been treated and stabilised, if they need to be airlifted to hospital there’s a lot more things we have to consider. From planning where we’re going to land, getting the stretcher out, helping them get the patient into the aircraft and so on. At least with the new air ambulance, no one has to be left with a seat now! In fact, we can fly a patient’s loved one with us too.”

He sums up, “There’s so much satisfaction in this line of work. In a morning when your shift starts, you have no idea what you’re going to be called to, who you will help or what the outcome will be.”

“It’s so nice to know that what I do in my role helps Magpas Air Ambulance continue to save lives every day. And when a patient we’ve been called to comes back to the base to meet us following their recovery, and you see how the service we’ve provided has given them a second chance at life, all the hard work that goes into this job is so worth it!” 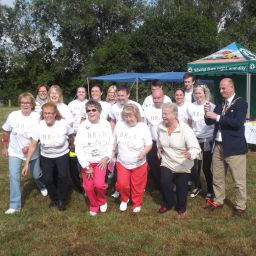