At 11:55am yesterday morning (27th), Magpas Helimedix (Doctor David Driver and Paramedic Phill Almond) arrived in a rural area, south of March, via the Magpas Helimedix Air Ambulance. A man (in his 30’s) suffered injuries to his leg, following an awkward parachute landing.

The Helimedix assessed the patient and put measures into place to protect his leg, whilst working alongside an EEAST Ambulance Crew at the scene. The man was then taken to Hinchingbrooke Hospital in a stable condition, in a Land Ambulance.

The Helicopter team who flew the Helimedix to the scene was: Pilot Richard Eastwood and Crew Member George Phillips.

All the Emergency Services worked well together. 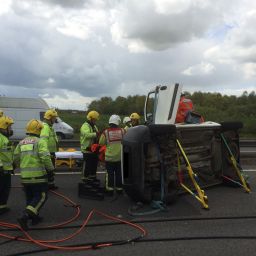